This is the speech given by Michael Kaufman, Pamela’s son, at her memorial service which took place Wednesday, September 30, 2015 at the Bel-Air Country Club in Los Angeles, CA. 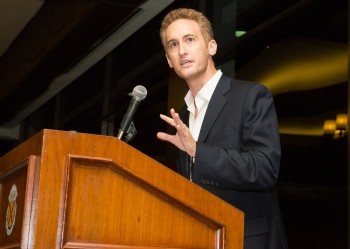 Michael Kaufman, son of Pamela, at the memorial service

About a year ago, I discovered something odd in Mom’s home office. You can picture the room—books and laptops covering every square inch except for the dog’s bed. What I discovered, taped to the bookshelf on her right, was a quotation, clipped from a magazine.

TS Eliot: “We shall not cease from exploration, and the end of all our exploring will be to arrive where we started and know the place for the first time.”

That wasn’t the strange thing. She had quotes everywhere. The strange thing was that on the bulletin board in front of her computer, this time blown up into much larger print, there was that same quote a second time.

“We shall not cease from exploration, and the end of all our exploring will be to arrive where we started and know the place for the first time.”

The same thing, twice. Now, she was known to absentmindedly buy a second dental floss before the first one had been opened, but this didn’t feel like that. And so for the last year, I wondered, why those words?

The exploration was the easy part.

I vividly remember, during the days of SATs and vocabulary flashcards, Mom asking if I knew the definition of catholic, the version with a lower-case c. I didn’t. The definition, I learned, is “broad or wide-ranging in tastes.” “That’s a word you should know,” she said.

Any new way of looking at the world, any new film, new frequent flyer program, anything—she explored it.

She knew about Malcolm Gladwell before you did.

The songs on her iPod would have given her credibility in Brooklyn and Silver Lake.

But for her, of course, the real exploring was genealogy, which is “the study of family histories,” but which, in our house, was sometimes mocked as “the study of dead jews.”

To demean it that way, or as just the “filling out of family trees,” is a bit like calling Apple just “a technology company.”

Genealogy is much more, because genealogists are alchemists. They study people and, in the process, they turn the quotidian into the divine.

And for her, I figured, genealogy was the way to live out her favorite narrative trope, which was: an individual, with limited resources, searching, and fighting, and connecting, and changing the world.

For example, all those movies she loved and insisted we see: “All The President’s Men.” “Erin Brockovich.” “The China Syndrome.” Even Harrison Ford in The Fugitive, the logic being, anyone can keep the police on the run, but to prove your innocence while doing so—that’s something.

So figuring out the exploration was easy. The “never ceasing” was, too. All those clichés—“won’t take no for an answer,” “questions authority,” “speaks truth to power”—that was her, and that was part of it. But far more important, and what I can’t emphasize enough, is that “never ceasing,” in this case, is to be taken literally: She did not stop.

At home, she worked on her stuff at least 12 hours a day, 7 days a week, for nearly 15 years. On the road, which was often, her days were packed tighter—she kept the schedule of a Secretary of State.

But back to the end of the quotation, and where I got stumped: “the end of all our exploring will be to arrive where we started and know the place for the first time.”

I actually first thought of baseball, which she enjoyed with us. She didn’t care for the other sports—as she called them, the end-to-end, the back-and-forth ones—but baseball she liked. And in baseball, one explores, and one tries to get home.

But still—“arrive where we started”—where was she trying to get back to?

I convinced myself it was somehow related to her interest in foundations, the building blocks of culture.

She loved etymology, the study of word origins.

She loved Greek mythology, the Classics, those “Timeless Tales of Gods and Heroes.”

She once confessed to me that she found high holy day services boring, but that she amused herself by reading through The Old Testament, which was particularly remarkable because that was the first time in recorded history that “The Old Testament” and “amusing” had been used in the same sentence.

Ultimately, I settled on the idea that “arriving where we started” was really just another one of her favorite things: a MacGuffin, the Alfred Hitchcock plot device. Just something to drive the story—or, in this case, her life—but ultimately less meaningful than what develops along the way.

What it all added up to, the exploration, the unceasing, the knowing, for me, was that she had found something she loved to do, and that she was extraordinarily good at—in other words, what all of us are looking to find. Pretty impressive.

And then she died.

And then the tributes began pouring in from all corners of the world—on blogs, on Facebook, on sites that she created—and I realized I had gotten it totally wrong.

Jennifer Mendelsohn: “It was ultimately Pamela who found the clue that linked us to the living descendants. My husband’s grandmother, who had lost 99.9% of his family in the Holocaust, learned, at 95, that she actually had three first cousins alive and well in the U.S.”

John Diener: “I could not have imagined… how involved I would become in the pursuit…in a great part, because of interacting with Pamela.”

Tammy Hepps: “And it was always on her mind that non-Jews from Galicia had no idea how broad the materials…really were. At the general conferences we attended together I never saw her pass a table for a Polish or Ukrainian genealogy group without her rushing over to introduce them to the website.”

Logan Kleinwaks: “Every project she shepherded, every lecture she delivered, every meeting she organized, every countless hour of planning and email and conversation to advance the cause…could instead have been spent on her own personal research”

Randy Schoenberg: “In Pam’s memory, we should all vow to add more town projects on Geni. It is too much for anyone of us to do alone, but working together, we should be able to do it.”

“She was one who cared more about helping others than building out her own tree.”

TS Eliot: “We shall not cease from exploration, and the end of all our exploring will be to arrive where we started and know the place for the first time.”

We. It was about the “we.” These passions weren’t solitary pursuits. They were collective adventures, and the meaning came from the coaching, the sharing, the teaching—from what she could do for others.

She is gone, which is a tragedy. But we continue, and that’s an opportunity.