In late 2019, Gesher Galicia embarked on a collaborative project with the Przemyśl State Archive to identify a set of originally 577 files held in Przemyśl, nearly all of which appeared to be index books of registers of Jewish vital records from the former Galicia, but whose towns of origin were unknown. Almost 50 people, […]

Project Coordinator: Paweł Malinowski Background Fond 424 is a collection of files of Jewish materials held at AGAD in Warsaw. It is a much smaller companion to Fond 300, which—as of November 2017—consists of 3,278 registers of Jewish metrical records (including index books, and duplicate books), nearly all of them from the eastern part of […]

Project Coordinator: TBD The Holocaust Project is concerned with events in the territory of the former Galicia during the period 1939-1945, particularly those with genealogical and historical information about the Jewish inhabitants of the region. Apart from state archive branches, municipal offices, museums, libraries, universities and research institutes in Poland and western Ukraine, there is […]

Project Coordinator: Jay Osborn Summary: Gesher Galicia’s unique Maps Project connects people to places across time, and uses geography – scaled from villages to empires – to help tell the stories of people’s lives. When combined with vital records, cadastral maps can help researchers locate the places where their family homes once stood throughout Galicia. […]

Project Coordinator: Mark Jacobson General information Many lists of Jewish taxpayers from Galicia in the 1930s have survived. Among them, are Jewish taxpayer record sets from the Stanisławów area, held at the DAIFO archive in Ivano-Frankivsk, and another batch from the Tarnopol area, held at DATO in Ternopil. Please click here for a table of […]

Project Coordinator: Andrew Zalewski Summary. The project focuses on the period 1784 to 1939, covering several universities in the Habsburg realm and in the successor states, as Galician Jews traveled long distances from home to gain a medical education. In Galicia, there were two universities: the Jagiellonian University in Kraków and Lemberg/Lwów/Lviv University. Others were […]

The Josephine land survey was ordered by Emperor Joseph II in 1785 (hence, it is sometimes referred to as the Josephine cadastre). Thousands of communities in Galicia — along with those in other provinces of the Habsburg Monarchy — were surveyed, with the names, house numbers, and every plot of land recorded in specially prepared registers. The Franciscan land survey — ordered by the imperial edict of Francis I in 1817 (and referred to as the Franciscan cadastre) — recorded Jewish names using given names and surnames.

Gesher Galicia has indexed the 1910 Jewish Census of Tarnopol, the last official census conducted in Galicia by the Austrian government, which is held in the State Archive of Ternopil Oblast (DATO). With almost 14,000 names, it lists every Jewish person resident in Tarnopol in 1910, along with information on people who had moved away permanently, or were studying in other places. Entire households are listed, along with their house numbers, professions, and ages, and relationships within the household. 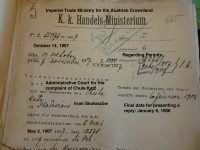 Gesher Galicia has indexed several selected files of ministry records kept by the Austrian government in the late 19th and early 20th centuries. While not specifically focused on the Jewish population, several of these files contain detailed information on people, many of whom were Jewish. This is particularly the case with records dealing with innkeepers, lawyers and certain other occupations. These Austrian Ministries files are held at AGAD in Warsaw. It is not really clear why these records ended up in Warsaw, rather than in Vienna or even Lwów (which is the source of many of the records).

In the spring of 2007, Gesher Galicia (GG) initiated the first phase of a long-term project to obtain cadastral maps and landowner records from the Central State Historical Archives in Lviv, Ukraine. The project has continued to the present day, with maps and records being acquired from the Ternopil Oblast Archives starting in 2010, the Krakow Archives in 2011, and in 2013 expanding to the Przemysl branch of the Polish State Archives and other regional archives in Poland that have maps and records for Galician towns.

The Josephine land survey was ordered by Emperor Joseph II in 1785 (hence, it is sometimes referred to as the Josephine cadastre). Thousands of communities in Galicia — along with those in other provinces of the Habsburg Monarchy — were surveyed, with the names, house numbers, and every plot of land recorded in specially prepared registers. The Franciscan land survey — ordered by the imperial edict of Francis I in 1817 (and referred to as the Franciscan cadastre) — recorded Jewish names using given names and surnames.

Vital records are the natural starting-off point for researchers. These birth, death, marriage and divorce records for Galicia can be located in a variety of archives – scattered in different places, even for a single town. The ways records were divided after the war often didn’t follow any kind of logic.