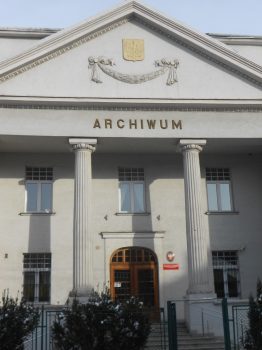 The Przemyśl State Archive is important for Jewish Galician genealogical research, as it contains a large number of files with Jewish vital records and community records, from both eastern and western Galicia. It is also the only state archive in southern Poland with a significant quantity of Jewish records from eastern Galician towns.

There are 22 fonds with Jewish records in the archive, the largest of which is Fond 154. This fond contains 71 first-level divisions (or “Series”), in which there are a total of 1,044 “units”, or subfiles. The first 69 files are each for a separate (eastern or western) Galician town. Fond 154, Series 50, for instance, contains 28 subfiles from Stanisławów, including material from the Stanisławów ghetto. These subfiles are of different types—vital record books or index books, sets of loose certificates, lists of residents, and various types of Jewish community documents.

Series 71, the final first-level division in Fond 154, with 124 subfiles, contains sets of vital record certificates from a further 66 towns, none of which appears in the list of the first 69 towns.

Fond 395, with school records, originally contained material from a single Jewish school in Przemyśl. Further material was added to the fond, which now has 50 files from nine towns. Two of the files are from a mixed set of towns.

The second largest fond of Jewish material in Przemyśl is Fond 1657, with records from Tarnopol. The original fond had 69 files, none of which were vital record books or certificates, though they may have contained vital information. Now there are 328 files in the fond, many of which are books of the kehilla. These cover a wide range of topics—from minutes and budgets of the community council, to an inventory of the poultry slaughterhouse, and documents from 1939 from the aid committee for refugees from Germany. There are also now several books of vital records, mainly in the form of index books of vital records.

The following are the Jewish Galician fonds in the Przemyśl State Archive.