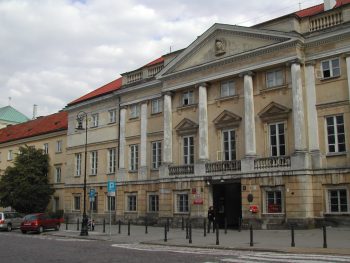 In the early 1950s, a large consignment of archival material arrived in Warsaw from areas in the eastern parts of interwar Poland, which were by then in the Soviet Union. The contents included vital (metrical) records and community records from the main religious communities of the region—Roman Catholic, Greek Catholic, Jewish, Protestant, and Orthodox. These records had been kept by separate offices, according to religious affiliation. The books were from towns that—during the Second Polish Republic (1919-1939)—had been in the Wołyń (Volhynia), Polesie, and Nowogródek voivodeships, and the eastern part of Białystok voivodeship—as well as the voivodeships of Lwów, Stanisławów and Tarnopol, the three eastern “Galician” provinces. The Jewish element in this contingent, though—consisting of some 5,500 sets of vital records (both in bound form and loose) and index books of vital records, censuses, and community material and correspondence—came only from the Galician areas.

This material was then safely stored away in the Ministry of Information in Warsaw for 30 years, until in the early 1980s, it was decided to bring out this forgotten storehouse of information. Those sets of records with vital information that were more than 100 years old were sent to the Central Archives of Historical Records in Warsaw, AGAD (Archiwum Główne Akt Dawnych), while those less than 100 years old were earmarked for the Civil Registration Office (Urząd Stanu Cywilnego, USC) in Warsaw.

Of the Jewish bound volumes of vital records, around 1,750 went to AGAD. The remainder of these books was directed to the USC office. The division, though, was not done very accurately, with the result that AGAD received several hundred books that were, at the time, less than 100 years old. Since 1997, USC Warsaw has transferred books to AGAD as they have become more than 100 years old. As of mid-2022, Fond 300 has 4,145 Jewish vital record books and indexes of vital records books from 109 localities, all but four of them located in the eastern part of the former Galicia.

In 2015, an amended Polish law applying to Civil Registration Offices took effect, allowing death and marriage records more than 80 years old to be made publicly available, while the restriction on birth records remained at 100 years.

The file with the earliest records in Fond 300 is File (sygnatura) 388, containing death records from Kamionka Strumiłowa that start in 1789. The records with the latest dates are of two marriages in early 1943, from an index book of Jewish marriages in Tarnów.

AGAD has made scans available of nearly all the Jewish registers currently in Fond 300, and there are links to these on AGAD’s own online inventory, as well as on the website of the Polish State Archives. As of mid-2022, slightly less than 70 books do not yet have scans available. In 1995, the archive discovered that four books in Fond 300 were missing—one from Lwów (B 1922-1924) and three from Lwów-Zniesienie (B 1883, B 1889, and D 1889). In addition, there is no File 1744, because of an error in the inventory, and not because of a missing book. Gesher Galicia’s own inventory of Fond 300 includes links to all the files that have been digitally scanned and made public by AGAD.

AGAD has a second set of Jewish records, Fond 424, consisting, as of mid-2022, of 213 files. Many of these are also vital records, but in loose form (such as certificates of vital events), as opposed to the bound volumes in Fond 300. There are also community records (with over 30 of them from Tarnopol) and marriage banns records, either in loose or bound form.

Most of the towns with records in Fond 424 are from the eastern part of the former Galicia, while a few, such as Kraków, Lesko, and Przemyśl, are in western Galicia. There are also a handful of towns now in Ukraine that were never in Galicia, including from the former Bukovina and the Polish interwar Volhynian voivodeship.