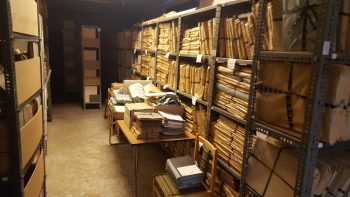 A storeroom in the Tarnów state archive

The large and modern Rzeszów archive opened in November 2016. The archive’s previous site had been a former synagogue in the old town center. The archive contains 11 fonds of Jewish vital records, the largest of which is from the town of Rzeszów, with records up to 1942. Another fond has vital records from Dobromil, now in Ukraine— the only non-Polish town with Jewish records in this archive. In addition, there are four fonds with Jewish community records, including from Rzeszów itself, and a large collection of material from Czudec, a part of which is from the Holocaust period.

Sanok
The Rzeszów archive has a sub-archive in Sanok (Archiwum Państwowe w Rzeszowie, Oddział w Sanoku), containing Jewish vital records from eight towns in the Sanok region, including from Lesko/Lisko and Sanok itself. 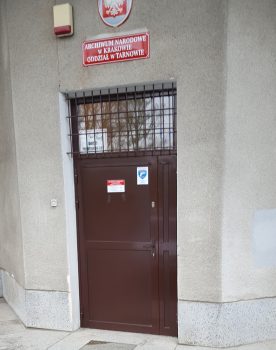 The National Archives in Kraków contain Jewish vital records from several towns in the Kraków region, including much material from Kraków itself from 1798 onwards. There are also record sets from Klasno-Podgórze, Krościenko nad Dunajcem, and Nowy Targ.

Bochnia
The Bochnia sub-archive of the Kraków archive (Archiwum Narodowe w Krakowie, Oddział w Bochni) has Jewish vital records from six towns, including from Bochnia itself.

Nowy Sącz
The Nowy Sącz sub-archive of the Kraków archive (Archiwum Narodowe w Krakowie, Oddział w Nowym Sączu) has vital records from four towns – Grybów, Muszyna, Nowy Sącz, and Stary Sącz. There are also important sets of municipal documents (not specifically Jewish) from some of these regional towns. Fond 15, for instance, with municipal records from Nowy Sącz, has 16 files with valuable information on the Holocaust in the town. Similarly, Fond 18 contains files with Holocaust-period material from Krynica.

Tarnów
The Tarnów sub-archive of the Kraków archive (Archiwum Narodowe w Krakowie, Oddział w Tarnowie) has Jewish metrical fonds from seven towns in the region, including from Tarnów itself and Dąbrowa Tarnowska. The large Fond 276, whose files are otherwise all from Tarnów, also contains two index books, from Nowy Wiśnicz and Tarnopol, both of which are likely to have ended up in this collection by mistake. All the other known Jewish metrical records from Nowy Wiśnicz are held in the state archives in Bochnia and Kraków.

In the Katowice State Archive there are Jewish vital records from just two towns that were in the former Galicia through the 19th century and up to World War I. These towns are Chrzanów and the nearby Trzebinia, with Jewish vital records in Fonds 2694 and 2482, respectively.

Bielsko-Biała
The Bielsko-Biała sub-archive of the Katowice archive (Archiwum Państwowe w Katowicach, Oddział w Bielsku-Białej) lies the far west of the former Galicia and on the boundary between Galicia and the former Austrian Silesia. The town of Bielsko-Biała is made up of two historically separate towns divided by the river Biała—Bielsko to the west, in what was Austrian Silesia, and Biała to the east, just inside Galicia. The only Jewish records in this archive from a Galician locality are two files of death records from Lipnik (in German, Kunzendorf) in Fond 1330. Lipnik today is an eastern district of Bielsko-Biała. 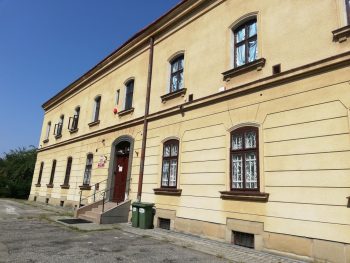 Sandomierz archive
Also in southern Poland there is a state archive branch in the town of Sandomierz, a sub-archive of the Kielce State Archive (Archiwum Państwowe w Kielcach, Oddział w Sandomierzu). Though the town itself lies just outside the boundary of the former Galicia, it contains Jewish vital records from two Galician localities, Tarnobrzeg (Fond 921), and Radomyśl nad Sanem (Fond 1151).

The Polish State Archives has a website that seeks to create an inventory of all records, maps, and other documents in state archives in Poland. It also now has an increasing number of scans of archival documents, and can be searched at: szukajwarchiwach.gov.pl/en/.

For Gesher Galicia’s inventory of Galician Jewish vital records and other types of records held in the archives listed above, click here.