Please click here for a table of all the Jewish taxpayer records that Gesher Galicia has indexed and put onto the All Galicia Database.

The basic indexes are made available—as with all Gesher Galicia projects—on the freely searchable All Galicia Database. In addition, all completed spreadsheets of indexes, along with images of the original records, are made accessible to Gesher Galicia members through the Members Portal on the website. 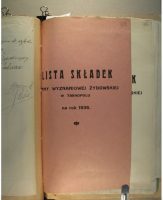 Sunday, October 25, 2020, Joint Program by Gratz College, Melrose Park, PA and Gesher Galicia. Andrew Zalewski, VP of Gesher Galicia, presented: THE BATTLE FOR JEWISH RIGHTS. The talk focused on a tumultuous period in Galicia and will be illustrated by unique records. A recording of the webinar is on Gesher Galicia’s YouTube channel here (please subscribe).