Project. The project focuses on the period 1784 to 1939, covering several universities in the Habsburg realm and in the successor states, as Galician Jews traveled long distances from home to gain a medical education. In Galicia, there were two universities: the Jagiellonian University in Kraków and Lemberg/Lwów/Lviv University. Others were situated outside Galicia (e.g., in Budapest, Vienna, and Prague). We conduct comprehensive surveys of the available university records, making basic information available in a searchable format on the All Galicia Database accessible to all.

The Inventory Table lists archival information pertaining to the records of Jewish medical students that Gesher Galicia has indexed and made available on the All Galicia Database. To date, there are close to 7,000 records, from several universities.

Members of Gesher Galicia can view the expanded and annotated listings of Jewish healthcare professionals (for example, name changes, parents, towns of residence, and Holocaust-related and postwar data, if applicable). This information can be accessed after logging to the Members Portal and following to the Archival Records folder, or by clicking here.

Background. Prior to the Austrian annexation of Galicia in 1772 only a few Jewish medical practitioners had academic degrees from universities (namely, from those in Italy and Prussia). At the end of the eighteenth century, the Habsburg emperor Joseph II’s toleration policies expanded educational access for Jews, coinciding with the founding of the Faculty of Medicine at Lemberg (Lwów) University in 1784. After first Jewish students graduated there (in surgery: 1786, and in medicine: 1804), the process continued in Kraków (in surgery: 1803, and in medicine: 1843). Other Galician Jews completed medical studies in the universities in Vienna (in medicine and surgery: from 1815 on) and Budapest (in surgery: from 1829 on).

Jacob Rappoport “Judeus” (1772–1855): faded student record from Lemberg University in 1798. After graduating in 1804, he became one of the first university-trained Jewish doctors of medicine in Lemberg.

In 1900, women were finally allowed to study medicine at universities in Austria-Hungary. It is noteworthy that a Jewish woman was the first female to graduate with a medical degree in Galicia – at Lwów University in 1904. By 1918, Jewish men and women comprised 30 percent of all students in the two Galician universities. Jewish women students were particularly overrepresented, forming a half of female student body in the closing years of Austrian Galicia.

Trailblazers and rebels. Many Jewish physicians challenged existing stereotypes and expectations of the time. Their nonmedical activism, particularly in civic affairs or support of religious reforms (in the progressive movement), and contributions in the literary sphere all had a deep impact on the Jewish community of Galicia. They provoked social debates and often adopted “new” life styles. 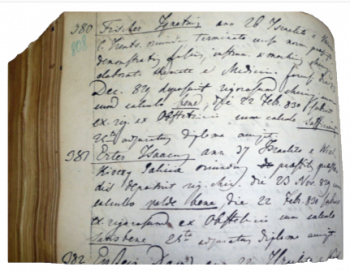 Isaac Erter (1792–1851): graduation record as a master surgeon from Pest University in 1830. Erter practiced in Brody; he became a popular Jewish satirical writer.

Jewish medical practitioners displayed different cultural and linguistic affinities – from an initial acceptance of a dominant German influence, through the embrace of German culture, but with either Slavic nationalistic overtones or a focus on Hebrew language, to the early adoption of a Polish-Jewish identity. By virtue of their profession, they moved with ease between different linguistic, cultural, and religious segments of society, without abandoning their Jewish heritage. Throughout the period of Austrian Galicia (1772–1918), Jewish medical professionals were frequent harbingers of modernization within the traditional society.

To learn more about Galician Jewish students and university records, please refer to a series of articles in the Galitzianer (June/September 2016; December 2017; December 2018; June 2019—the interwar period). Prior issues of the journal can be found in the Members Portal.

Contributions. To support the project, please direct your contribution to the “The Galician Medical Students/Doctors Project.” As always, we cannot guarantee in advance whether an original record set will be complete or whether it will contain information of interest to a particular donor.

Financial donations to the project will allow us to advance this work and post lists of students and graduates, with their personal information if available, in the Members Portal exclusively accessible to the members of Gesher Galicia.

Donations by credit card or PayPal may be made online, through the Gesher Galicia website, by clicking here.

If you have questions about the Jewish Medical Students project, please contact: andrew.zalewski@geshergalicia.org