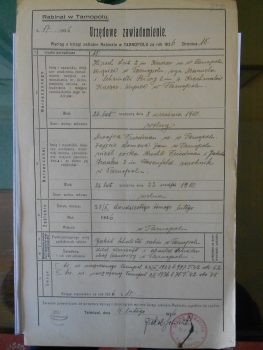 Fond 424 is a collection of files of Jewish materials held at AGAD in Warsaw. It is a much smaller companion to Fond 300, which—as of November 2017—consists of 3,278 registers of Jewish metrical records (including index books, and duplicate books), nearly all of them from the eastern part of former Galicia. Fond 424, on the other hand, with under 200 files, contains vital records, but in loose form (such as death certificates, and marriage banns certificates), as well as other types of non-metrical records, such as financial accounts and other records of Jewish communities.

Many of the files in Fond 424 are very short, in some cases relating to just a single person. Because the material is often made up of loose sheets, a file may well be incomplete for the period it is supposed to cover. Most of the towns, as with Fond 300, are from the eastern part of the former Galicia. Three are from the Volhynian area or the former Bukovina (all outside Galicia) and there is also a small amount of material from Kraków and Przemyśl.

None of the files in Fond 424 have previously been microfilmed or digitized.

Gesher Galicia has scanned the 151 files that are considered the genealogically most useful out of 207 files presently in Fond 424 at AGAD. These images of records are all available for viewing—for Gesher Galicia members only—in the Archival Records section of the Members Portal.

Gesher Galicia has indexed over 100 of the files in Fond 424. Several of these are already on the All Galicia Database while others need uploading—or at least updating. This part of the project will be completed in 2020.