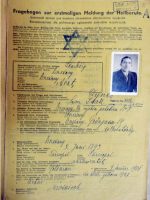 The Holocaust Project is concerned with events in the territory of the former Galicia during the period 1939-1945, particularly those with genealogical and historical information about the Jewish inhabitants of the region. Apart from state archive branches, municipal offices, museums, libraries, universities and research institutes in Poland and western Ukraine, there is also much information of importance throughout the whole of Europe, and in North America and Israel. Sources include dedicated Holocaust and Jewish museums and research institutes; national, regional, municipal and university libraries; city museums and archives; government ministries; and private collections.

Click here for an inventory of all Holocaust-period records Gesher Galicia has indexed and made available on the All Galicia Database.

Vital records were ordered by the German occupying forces to be kept by the Judenrat, the Jewish Council. In the western part of former Galicia, this took place from September 1939 onwards. In the eastern part, records started to be maintained from late June or early July 1941. Some of these books of vital records, or index books of vital records, have survived. None extend beyond early 1943. During the Soviet occupation of the eastern part between September 1939 to June 1941, the Soviet authorities kept their own records of births, marriages and deaths. These started being recorded in early 1940. Until this switch took place, the Jewish metrical office continued to keep Jewish vital records as before. Very few of the vital records kept by the Soviet authorities are known to have survived.

Municipal records, spanning the period 1919-1945 (and thus including the Holocaust), exist for many Galician towns. In present-day Poland, such record sets may be found either in state archive branches—such as in the Nowy Sącz State Archive, which contains municipal records from the towns of Grybów, Krynica, and Nowy Sącz—or in municipal offices, as is the case for records from Tarnów. These files contain lists of Jewish residents, material on forced labor, books listing punishments (imposed for usually trivial or contrived reasons), and other correspondence relating to Jewish residents in this period. The various lists of residents will usually have been compiled in preparation for moving people into the ghetto, or for the purposes of forced labor or deportations.

Testimonies of death contributed by survivors form an important, if sometimes inaccurate, source of information about the Holocaust. Oral and written testimonies of the Holocaust are kept by specialist institutions, such as Yad Vashem in Israel and United States Holocaust Memorial Museum, as well as other institutions worldwide. Yizkor (memorial) books are a particular form of testimony, recording the memories of Holocaust survivors. In this category, the Rzeszów State Archive contains a collection of some 800 testimonies of death, given shortly after the end of the war in 1945 by Jewish survivors from the Dębica region.

Questionnaires for medical personnel were introduced under the Nazi occupation throughout Galicia, which doctors, nurses and other health care staff were obliged to complete. Often including photographs, these four-page forms provide details about the person and their family members, and where they had studied and practiced. The Holocaust Project has indexed over 100 such questionnaires, mainly those held in the Przemyśl State Archive, but also a small number held at AGAD. Yad Vashem holds a large set of these questionnaires.

Ghetto records survive in many cases, including lists of the inhabitants. In some cases, there are censuses or lists of residents from the period shortly before a ghetto was set up.

In the case of Stanisławów, for instance, there is much material in both the State Archive of Ivano-Frankivsk Oblast (DAIFO) in Ukraine and the Przemyśl State Archive. This includes a census of 1939; a partial index of ghetto residents; household index cards ordered by street address; a register of sick people in the ghetto; a short set of food ration cards; and a card index of those registered for an obligatory insurance scheme for employees and their families. For further information on Gesher Galicia’s work on the Nazi occupation of Stanisławów, please see the article “The Stanisławów Holocaust Project: bringing back lost names,” Galitzianer, December 2020, 17-20.

Wednesday, March 9th, 2022, 1:00 p.m. ET. Dr. Steven S. Turner, President of Gesher Galicia and Dr. Victoria Khiterer, Associate Professor of History at Millersville University will participate in a lunchtime session to discuss the Russian invasion of Ukraine. This session is sponsored by the Holocaust, Genocide and Human Rights Education Center of Mercer County and will take place on Wednesday, March 9th at 1 PM ET. This will be a virtual session over Zoom. We invite all of you to attend. Please RSVP to HGHRCenter@mccc.edu.