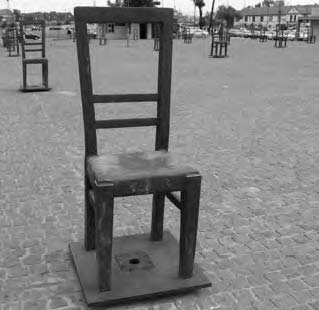 Some will say, not without reason, that it is rather late, too late. The town has become a museum in which Judaism is exposed and sold to American and Israeli tourists and others who come from all over the world to find roots or weep over a vanished world.

Others will say what has passed is dead and gone. The disaster took place sixty years ago. The time has come, with the disappearance of those who experienced it or some part of it, not to forget but to bring the weeping time to an end; the remembrance of what Jewish life was in Poland and in this town in particular can help prevent those times from coming back again.

One can also, in the course of a day in Cracow, think this and cry out that.

The Jews disappeared from Polish life at different times: first in 1941–1942, when most of them vanished in Auschwitz, Treblinka, Chelmo, Belzec, and other death camps; then in 1946, when Poles welcomed the survivors, in a reserved way, on their return from the USSR or when they came out of caves; and finally in 1968, when the anti-Semitic campaign was organized by the Communist government, probably in order to assert itself in the face of its rejection by the people.

Forty years later, the rare survivors of the Forties are disappearing little by little; the few witnesses of the year 1968 have forgotten about both Poland and Communism. Yet some others keep trying to bring Judaism back to life in Poland, among them Beit Warszawa, which describes itself as liberal, in the religious meaning of the word, and has organized an exhibition of ancient engravings depicting past Jewish life in Poland.

The exhibition was first presented in Warsaw, then in Cracow, where we were able to see it in the High Synagogue, so called because it is situated on the second floor of a building reinforced by external struts. The synagogue is now reduced to being history; one synagogue is quite sufficient for the few Jews living in Cracow today.

Yet there are plenty of synagogues in the town. They are used nowadays as meeting or concert places and bear witness to Jewish life up to 1939. Seven or eight of them can be found on or near Szeroka Street, the central place of Kazimierz, which has been the Jewish district since the 14th century.

Opening directly on to the square, the Poppera Synagogue has become an art gallery, jammed between two restaurants where you are offered Jewish food. A few steps away on the same square you find the Old Synagogue, which was built in the early years of the 15th century and has been modified over the course of time. The large room and its annexed rooms are used as the Museum of Judaism, where we admired an exhibition of Jewish painters of Poland from 1873 to 1939. The exhibition was organized within the context of the Festival of Jewish Culture, the eighteenth one, the first one having been in 1990. If one keeps in mind that the Berlin Wall was knocked down in 1989 and that the Soviet Union imploded in 1991, one can tell that the Poles, or rather some Poles, did not lose time trying to recover what had been an integral part of their country for almost ten centuries.

We arrived under a heavy rain on Szeroka Street on the evening of the festival closure. I am not good at estimating the number of people in a crowd, but there certainly were thousands of them vibrating with the various music groups who had come from all over the world to play “jazzy”, “rocky”, or original klezmer music.

The organizers, mostly Poles, boasted that they had reproduced here a “Jewish Woodstock”, and Beit Warszawa announced an attendance of 20,000. It goes without saying that to find a hotel room at a reasonable price was a feat during the festival.

The only synagogue still functioning stands on the pavement opposite the Poppera. Built against a cemetery, which was chronologically the second Jewish cemetery, the “New Synagogue” has been standing here since 1553. It is called Remu’h, which can only delight riddle and acronym lovers. In the cemetery, a wall has been built with pieces of broken tombstones, which, in that context, can only be a wailing wall.

A short way off the central square, on the corner of Kuppa and Isaac Streets—the streets of this district having kept their older names— you find a synagogue which was consecrated in 1644 and bears its sponsor’s name, Isaac Jakubowicz, who has nothing to do, as far as he knows, with the family name of this report’s author.

In the large room of that synagogue, and still in the context of the festival, was an exhibit of posters and photographs from Israel. In the corridor of the bookshop, situated on the ground floor of the High Synagogue, we found a poster which was not part of the exhibition; that poster dated very likely back to the beginning of the twentieth century, given the clothes and the graphics. The poster invites people, in Hebrew and English, to visit Palestine.

In Kazimierz, one can also find a ritual bath (mikvah) now located in a luxury hotel; a Jewish cultural center; a museum of Jewish Galicia founded by an American photographer; another busy square, the Novy (new), where the ritual slaughterhouses used to stand; and on every street corner, plaques reminding people of what Jewish life used to be there.

Among the numerous plaques, one pays tribute to the Jewish Fighting Organization which organized, at the very place where the plaque has been put, an attack against a café where Nazi officers used to come. Another plaque was placed by the promoters of the Yiddish Culture Festival as early as 1992, in memory of Mordechaï Gebirtig, who was murdered in 1942. Gebirtig was a Yiddish-speaking poet and dramatist. He was also a carpenter. In 1938, he composed a premonitory song, “S’brent” (“Our Shtetl Is on Fire”), which became a kind of hymn in ghettos and is now sung by Yiddish choirs in France.

As for me, this plaque reminds me of the expatriates and those who survived the war whom I met in the ready-made clothing, knitting, and fur workshops of Paris. Besides working to make a living, they belonged to the Yiddish intelligentsia: writers, actors, painters, and poets among which some have become rather famous and who had all been nurtured with the Culture of the Bible.

In 1939, 65,000 Jews were living in Cracow. The Nazis surged through Poland and decided to establish there the headquarters of the “General Government” of that part of Poland, not directly annexed by Germany. So honored a town could not decently include such a great number of Jews and, as soon as 15 August 1940, 10,000 Jews were commanded to leave Cracow. Where to? Nobody knew. But what followed showed that it was not of paramount importance. With the cynical but efficient improvement in their extermination procedures, the Nazis opened a ghetto near the beginning of 1941, on the other shore of the Vistula and close to a railway line, into which all the Jews still living in the town were soon gathered. A few months later and some kilometers further in the same direction, the Plaszow “working camp” was created. The camp would be easily provided with workers sent from the ghetto. It was there that the Schindler’s list event occurred, based on which Steven Spielberg made a film years later.

The ghetto was emptied in March 1943. It is now a large empty space called “Heroes of the Ghetto Square”, where a small building has been erected. On entering it, one finds oneself in a closed empty space with air ducts, with wire netting on the top, which is vaguely reminiscent of wagon walls. In front of it, in the square, empty chairs were placed in 2005, turned toward the opposite side of the wagon. The whole thing is impressive, even though the symbolism of the empty chairs is not quite clear.

On one side of the square, a chemist’s shop, which was a bar during the Communist period, then disused premises, is now a museum dedicated to the ghetto and the Plaszow camp. The Polish chemist Tadeusz Pankiewicz refused to leave his pharmacy, which was situated inside the area defined by the Nazis for the ghetto, and did his best to help the Jews locked up there. After the war, he wrote a book describing what had happened there and was awarded the “Righteous among the Nations” medal by Yad Vashem. Sixty-five thousand Jews were in Cracow at the beginning of the war; 2,000 survived, at least half of them saved by Schindler’s list.

There are other things worth seeing in Cracow, which, unlike its Jews, was lucky enough to be spared during the war. During the 12th century it had been the capital of Poland, well before becoming that of the German “General Government.” One can see a semi-Medieval castle and its cathedral; the remnants of a barbican and the wide marketplace; one of the oldest universities in Europe, the Jagiellonian University, named after a Polish king; and streets where it is nice to ramble and where you can see much about John Paul II and Nicolas Copernicus.

This paper was first published in French by LDJ (Liberté du Judaïsme), a Jewish French organization. It was translated into English by Flora Novodorsqui.
[/level-gesher-galicia-member]