I am not her granddaughter, but I could have been.

Bronia Horn was my paternal grandmother’s aunt. There was only a six-year age difference between Bronia and my grandmother. Bronia was born in 1904, my grandmother in 1910.

Both were born in Rohatyn, in what was then Eastern Galicia, today western Ukraine. Both left Rohatyn. For my grandmother, the destination was New York in 1914 with her father Isak (almost 20 years older than younger sister Bronia), her mother, and her two sisters. For Bronia, it was Palestine in 1936, to join her older sister Jute, who had emigrated there two years prior. Neither Bronia, Jute, nor my grandmother would ever see their beloved Rohatyn again.

My grandmother spoke of Bronia not as her elder but as her contemporary. That is how I, too, think of Bronia as I follow in her footsteps in my travels and continuing research—from Rohatyn to Vienna, to L’viv and Kraków, from Busko-Zdrój to Palestine, from New York to Israel. I think of myself as her granddaughter. I am the descendant she never had.

As I write this article, my husband and I are living in Kraków for three months. I am here to continue my research and, in part, to be close to Bronia: to be able to walk to the apartment where she lived from 1930–1932 at ul. Bozego Milosierdzia 4 while finishing her Master’s degree in German language and literature at Jagiellonian University; to meander the halls of nearby A. Witkowskiego Gimnazjum at ul. Studencka 12 where in 1931 she was an unpaid apprentice teacher.

What would she think if she knew that today I am sipping hot tea in a cafe around the corner from her 1930 home? 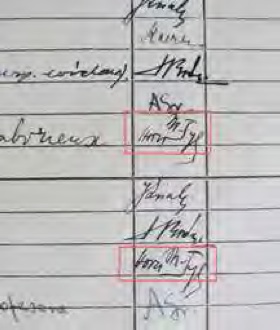 After finishing her teaching apprenticeship, in 1932 Bronia secured a paid position at a school, then called Gimnazjum Marshal Józef Piłsudzki, in Busko-Zdrój. Busko-Zdrój, about 75 km northeast of Kraków, had been a popular historic spa town with a reputation for good schools. Eighty years later, Bronia’s academic records, obtained from the archives at Jagiellonian University, led me in 2012 to Busko-Zdrój.

From these academic records I wanted to learn more about the school in Busko-Zdrój, so I searched the Internet, posted inquiries to the online digests of JRI-Poland and Gesher Galicia, and sent an e-mail to the school asking whether they might still have prewar records for my Bronia. The school was still at the same location and, as I subsequently learned, continued to have an excellent academic reputation. Today the school is called Liceum T. Kosciuszki.

Four months later, my husband and I moved to Kraków and settled into a new life and a new apartment. Then, about two weeks ago, I received a remarkable e-mail reply from two of the school’s current teachers.

Yes, the school still had some records: Bronia’s hand-written curriculum for that semester’s courses in German language and literature; a document showing Bronia’s name on the 1935 list of the school’s teachers; Bronia’s signature on a student record. The school had also found some photos: three group photos of the school’s teachers from the 1935–1936 school year. There was my Bronia, demurely seated in the front row, hands tightly clasped on her lap, wearing the same dark, somber dress with white decorative button at the neck in all three shots. Same sad expression. I immediately recognized her as one would recognize an old friend: my Bronia.

With this remarkable, unexpected reply (unexpected because I had come to assume my inquiry would go unanswered after so many months) I went from having but a single photo of Bronia (from her 1936 Polish passport) to having four.

I quietly cried at the dinner table that night when I realized that it was also the twentieth anniversary of Bronia’s death. 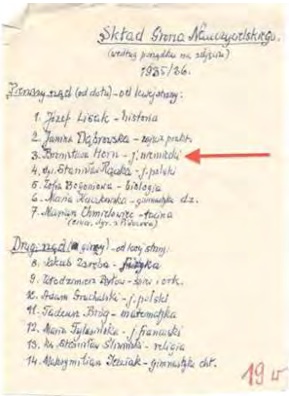 A 1935 photo of Bronia with other teachers, and a list of teachers that includes Bronia’s name

And so, almost exactly 80 years after my Bronia had been in Busko-Zdrój—the last place she called home in Poland before reluctantly leaving for Palestine—I found myself walking the halls of Liceum T. Kosciuszki and sitting in classrooms where Bronia once taught German language and literature. Before me were seated almost a dozen students from the English department of today’ s school, eager to learn what would bring an American all the way to Busko-Zdrój, who was Bronia Horn, and how was I related to her? Seated to my right was Dominika Michalska, their English teacher and one of the two teachers who had sent the records and photos of Bronia and who had generously invited me to come to the school to meet and talk to her students.

For about an hour and a half I spoke about Bronia’s life. I spoke as a granddaughter would speak as her descendant and the keeper of her memory. I recounted what I had learned through my research about Bronia’s studies in Vienna, Lwow (today, L’viv), and Kraków, attending the same prestigious universities that her older sister Jute had attended. I talked about Bronia’s early life in Rohatyn and of the extended Horn family, including Bronia and Jute’s older brother Isak, my great-grandfather.

I explained how from Palestine Bronia emigrated in the mid-1950’s to New York, following again her older sister Jute; how Bronia returned to Israel after Jute’s death in 1958, where she lived another 25 years and where today she is buried. I explained how Bronia’s nationality had originally been “Austrian” but became “Polish” when Poland regained its independence after World War I. I described how Rohatyn had been devastated in both World Wars because it had been the fighting front—sometimes in Russian hands, sometimes Polish, sometimes German—and how in 1941 it was occupied by the Nazis and became a place of death. I showed the students the few photos I have for some of the other family members: those who remained in Rohatyn after Jute and Bronia left for Palestine; those who had been shot by the Nazis and whose bodies had been dumped into unmarked mass graves. I showed them some of the faces that been the sisters’ parents, grandparents, brothers, sisters, and cousins. I explained that neither sister, Jute nor Bronia, ever returned to Rohatyn, and neither ever had any children.

The students asked excellent questions, which I did my best to answer. They were engaged and engaging, moved and moving. I felt buoyant to encounter such interest and share such intimacies.

Afterward, I was given a tour of the teachers’ lounge, the school grounds, and the town’s charmingly petite rynek (market square). Accompanied by Dominika and two of her students, I stood before Busko-Zdrój’s former Jewish synagogue, a lovely restored building with Italianate details, today housing a small grocery and notions store. Did Bronia attend services here 80 years ago, I asked myself? Did she sit in the park of the rynek gazing at the central fountain, from which radiate five or six bucolic pedestrian pathways? Did she too smell the blooming lilacs?

Eighty years after my Bronia lived and taught in prewar Poland, where Jews had contributed so much to the greater good, I came to Busko-Zdrój.

I am Bronia Horn. A teacher returning.

Proof that life can continue.

A special thanks to Dr. Alex Feller, founder of the Rohatyn Shtetl Research Group, for his enthusiasm, encouragement, and prompting for me to write this story, the latest in my continuing journey to follow in the footsteps of Rohatyn sisters Bronia and Jute Horn.
[/level-gesher-galicia-member]