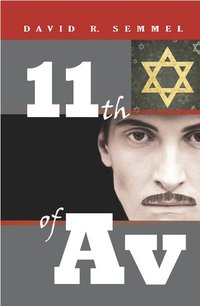 If it is axiomatic that you only experience your grandparents in their senior years, then how can you know who and what they were in their youth? For those with great family continuity, taking stock of them in their early years is comparatively easy—just look at your parents or your own early life and extrapolate back in time. But what could I do? My grandparents were immigrants from a place with strange traditions, different languages, and an opaque history. Comparisons rang hollow and my experience was worthless because there just wasn’t anything analogous between my youth in Vietnam-era America and Belle Epoque Imperial Austrian Galicia, where they spent their formative years.

Luckily, a few months before my grandmother died, I ﬂew down to Miami to spend the weekend with my Bubbie Fannie before heading to the beach with my college friends. Over the course of two late nights she told me her life story—not the familiar, middle-aged one that I knew by heart that started with my mother’s birth, but another one. It was a story about her when she was my age.

It was a story of war, of siege, of cannons and marauding Cossacks. It was set in some unpronounceable town in a nation that no longer exists in a time before radios and airlines. A beautiful place with rivers, castles, forts, forests and parks; a place where people stayed up late, drinking and smoking in cafés and beer halls or taking in theater and cinema. There was joy and love, but there was also hardship, heartbreak, and death; the highs seemed higher, the lows, definitely lower. This wasn’t the gray, drab shtetl I’d imagined; it was dangerous, dynamic, edgy, and dare I say fun. To my utter astonishment, Grandma and Grandpa were, once upon a time, cool.

In the twenty-plus years since the last of my grandparents passed away, I’ve come to see that not only were they “cool”, they were also driven, courageous, loving people replete with all the warts and flaws we share as human beings. Were they Elia and Rivka? No, they were real people with inﬁnitely complex, interwoven lives that we can only minimally access and crudely recreate. They were not Elia and Rivka, but they could have been.

Note: 100% of the net proceeds from this novel will be donated to charities involved in the restoration. and upkeep of Jewish sites in Przemysl. You can learn more about the book [amazon_link id=”144959171X” target=”_blank” ]here[/amazon_link].
[/level-gesher-galicia-member]