An Example from the Lecture “Beyond a Reasonable Doubt: Dealing with What You Know But Cannot Prove”

Many researchers, particularly those working on very large families or single-surname projects, reach a point where a particular relationship can be deduced but cannot quite be proven. The naming patterns may be there and everything seems to fit into plausible times and places, but neither documentation nor oral testimony exists that might even remotely be considered proof.

Do you record it as fact, without evidence? Or do you leave open a question when you actually “know” the answer? If you leave it open, you leave gaps and loose ends in your genealogy for no good reason. But if you bite the bullet and call it fact, you may never re-examine the decision in light of new source material. Your research heirs certainly won’t think to do so. How do you decide?

If you “know” that Reuven is the father of Shimon, do you link them as such, with a note that there is no direct evidence? Or do you leave Shimon with no father but add a note indicating that his father is almost surely Reuven?

In evaluating each individual case, I have found it useful to ask myself the following questions:

Beyond these questions, my own policy is that after I have decided that I “know” something, I will make the link only after I have found one additional piece of supporting evidence.

This article considers an anecdote from the Pikholz Project in an attempt to analyze one particular aspect of this dilemma, with an unexpected epilog.

We had known for some time that a number of the Pikholz individuals living in Israel had come from Buczacz. Shalom of Haifa and Zvi of Netanya were the sons of Avraham. Yitzhak of Haifa was the son of Mordecai. Another Mordecai was the son of Yehushua. But all these were long gone by the time the Pikholz Project got off the ground. The next generation knew enough to confirm that Avraham, Mordecai, and Yehoshua had been brothers, but no one seemed to know their parents’ names. No records are available for Buczacz, so we could not do the usual research that might take us back another generation or at least give us some dates to work with.

We also had several Pikholz descendants from Skalat who knew that the Buczacz Pickholzes were some kind of cousins, but it wasn’t anything a responsible genealogist could record in a database. Those cousins were all descended from a Pikholz couple—Mordecai (1805–1864) and Taube (1802–1872)—and it was quite possible, even likely, that the head of the Buczacz family was a son of this couple, as well.

We also had a reference to a “R’ Yakli of Buczacz” who was a Pikholz or married to one, who had written some apparently unpublished Biblical commentary (David Tidhar, Encyclopedia of the Pioneers of the Yishuv and Its Builders [in Hebrew], vol. 10, p. 3,541; Tel Aviv, 1959).

We considered that this R’ Yakli may have been the father of the three brothers. He sounded like a learned man, but not one who held an official position.
Our first break came when I had a look at the grave of Yitzhak in Haifa, which commemorated his parents as well. The inscription showed that the head of the family, Yitzhak’s grandfather, was Chaim Yaakov, but had no mention of his wife.

We knew it was possible that this Chaim Yaakov and R’ Yakli were one and the same, but they could well have been brothers-in-law or cousins.

Our next discovery tied up some of the loose ends. In the Pages of Testimony at Yad Vashem, I learned that the three Buczacz brothers had a sister Rivka who married a man from Radauti, Bukovina, and that this couple had living descendants. One of those was able to confirm that R’ Yakli was the same Chaim Yaakov and also told us that Chaim Yaakov’s wife was Gittel. No one had any idea when Chaim Yaakov had lived and died, as no one seemed to have been named for him.

By this time I knew that Chaim Yaakov had had a daughter Taube and a son and two grandsons named Mordecai, so it seemed reasonable to think that his parents were Mordecai and Taube. At this point, the family looked like this diagram: 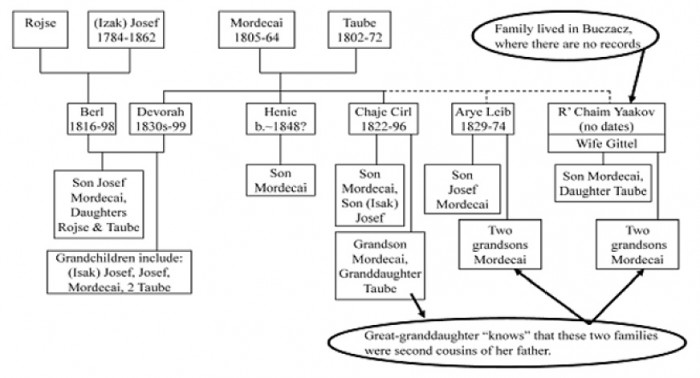 It was looking good, but still not good enough to consider making a decision.

I next turned to Tom Weiss, who had photographed all the remaining stones in the Buczacz cemetery. I had helped with the translations, so Tom had given me a copy of the Excel file for the whole lot. Some of the stones showed surnames, but there were no Pikholzes. I searched for “Given name = Chaim Yaakov” and found one. The father was Mordecai and the year of death was 5671 (1910). There was no indication of age, no mention of his wife, nothing that said he had come from Skalat. Nor was a Gittel buried in the area. The name Chaim Yaakov ben Mordecai was what I wanted, but this was just a circular proof, demonstrating nothing. The inscription, however, was fascinating:

A pure and honest man, a Hassid
And Gaon, Rav R’ Chaim Yaakov
ben R’ Mordecai z”l died
11 Mar-Heshvan 5671
A humble man from his youth
Dedicated all his days to Torah
He was an instructor in Israel
But due to his great modesty
Never wanted a position for himself
And did not want to use the Torah
As an axe to dig with.
[a Talmudic expression meaning that he did not use Torah to make a living]
He taught his sons to fear God
A generous man, whose house was
Always open to everyone. His soul
Ascended to Heaven in holiness
And purity. [blur that is probably age]
May his soul be bound in life

This sounded to me like Tidhar’s very brief description of R’ Yakli, especially the bit about not using the Torah as an axe to dig with. That brought me to where I was sure this was our man, but I had no direct proof. I was at the point of the dilemma described in the introduction. I could record Chaim Yaakov as the son of Mordecai and Taube, but if I did so, no one would ever revisit the matter in light of new developments. I consulted with the six living greatgrandchildren, some of whom had lived in Buczacz and who might have visited the grave or at least had some notion when Chaim Yaakov had died. But they knew nothing.

I was sure this was right, but according to my own rule, I needed one more piece of supporting evidence. I was stymied, and worse, I had no way to try to move this forward. End of story? Was this to be an example of knowing yet having to live with the uncertainly? It certainly looked that way.

About a year later, I received an email from a genealogist friend here in Jerusalem, Rabbi David Shapiro, who works with manuscripts professionally. He was transcribing and translating from Yiddish the notes of a rabbi who had lived in the United States until his death in 1974. R’ David sent me the following quote from the manuscript:

My grandfather’s daughter was matched with the son of R’ Chaim Yaakov Pickholz of Buczacz, a leaseholder in a village near Buczacz. R’ Ch[aim] Y[aakov] is a recognized Torah scholar and an authority on halacha. He even authored a book on the subject of the laws of treifus of broken bones, and even contested the opinions of the Levushei Srad (whose book on that subject is considered authoritative). He was offered a position as a rabbi in Buczacz, but disdained the burden of public service and the rabbinate, and chose to work in the fields. In fact his sons literally worked in the fields like peasants despite the fact that they were all Torah scholars who worked in the fields all day, returning home at night to learn gemara and [commentaries].

R’ David agreed with me that this description fit hand in glove with the inscription on the gravestone.

This still does not qualify as proof by the standard definition, but it is enough for me to formally list Chaim Yaakov Pikholz as the son of Mordecai and Taube.
[/level-gesher-galicia-member]