In July 2008, a group of nineteen French Jews took a tour to Eastern Galicia and Bukovina, provided by a Jewish cultural organization, Valiske, and directed by an outstanding guide, Andre Kosmicki. We, part of that group, were in search of our roots, looking for the traces of our parents’ stories about the region and for tombstones of relatives. Having read Father Patrick Desbois’s reports on mass executions in Ukraine – Bullets: A Priest’s Journey to Uncover the Truth Behind the Murder of 1.5 Million Jews – we thought we knew what to expect.

Starting from Krakow, we traveled east to Tarnow where – in the town’s regional museum – we saw The Vanished World, a remarkable photo exhibit on the holocaust in Jewish Tarnow. After a visit to Przemsyl we crossed the Polish-Ukrainian border at Medyka.

The capital of Eastern Galicia, Lemberg/Lviv, had a pre-war Jewish population of 100,000 served by fifty synagogues. Only a few ancient stones remain of the bombed structure of he Goldene Roysz (Golden Rose), one of the two still identifiable synagogues.

An eighty-year-old witness and survivor from Lemberg, Borys Borukh Dorfman, recounted that the Nazis had burned one of the synagogues during a service. In Drohobycz, the head of the Judenrat, aware of the distress of homeless, starving Jewish orphans whose parents had been executed, asked the German authorities for permission to set up a soup kitchen for the children in one of the synagogues. It took the Germans two days to make the decision; after the authorization was given, while dozens of children were gathered, armed men stormed into the room and shot down eighty-one of them.

That synagogue still stands; it is used as a gym by the name of Spartak. A bank has recently bought the building, which has no commemorative plaque. Alfred Schreyer, a pupil of Bruno Schultz, who accompanied us on the visit to this gym told us the story.

On the sunny Sunday afternoon of July 27, on the beautiful central square of Lviv, the Ringplatz, we saw men dressed in military camouflage gather on a stand and raise the flag of the Ukrainian National Army, which had helped the Nazis in massacring the Jews. In Lviv and in other cities, we saw monuments dedicated to this National Army as well as streets named after Ukrainian nationalists’ heroes, the pogromists Bogdan Chmielnicki and Simon Petliura.

We could see traces of the Jewish people of Lviv from a nearby hill overlooking the city. A statue and a memorial are dedicated to the victims of the Ghetto. Next to the Yanovska/Janovski prison, a facility that is still used stands a bilingual sign: 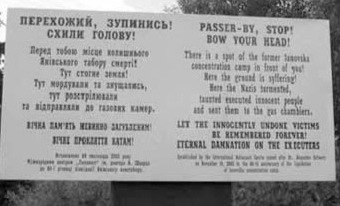 But the exact location of the nearby mass graves in the Piatski forest is not indicated; in fact, some are not hermetically sealed and one grave lies under a pond.

Near Drohobycz, barely noticeable from the road, a white Soviet- style statue stands between high grass and the first trees of the Bronicka forest. There, visitors are confronted with the so-called Shoah by bullets, the mass executions of Ukrainian Jews that began in the area as early as June 1941, when Germany attacked the Soviet Union. Farther inside the forest, we saw the site where most of the Jews of Drohobycz (15,000 men, women and children) were shot next to their mass graves. Several monuments dedicated to the memory of the victims cover the graves. In times of heavy rain, however, human bones can still be found on the ground. We actually saw this happen for the second time – first in Lviv – and there was no doubt, as one of us is an MD and radiologist.

In France, a Catholic priest, Father Patrick Desbois has significantly expanded the public’s awareness and information on the rule of this Shoah – one bullet, not more, per Jew. During the Aktionen, many who were not killed by the bullet were buried alive. Ukrainian witnesses told Desbois how the ground continued to move for days after the massacres.

Before the war Stanislawow, now Ivano-Frankivsk, was an important Hassidic center and had a large Jewish community. As many as 125,000 people were forced into the Jewish ghetto; except for the 25,000 people who were deported to the Belzec concentration camp, they were executed in the nearby forests. In 1945, there were 150 Jewish survivors in the city. According to Moyshe Leyb Kolesnik, the rabbi who serves today’s community of 300 people, the German military who occupied Stanislawow numbered only 92 to 96 men who were assisted by 2,000 members of the “black” Ukrainian police force. Thus, much of the large-scale massacre of the Jews of Stanislawow is undeniably accounted for by Ukrainian participation.

Today most of the 300,000 Ukrainian Jews immigrated from Russia. While people are primarily involved in making a living, they participate in the attempt to revive a religious community life that, for the Stanislawow rabbi, includes, among other initiatives, fund-raising through a small business operation and the ongoing rehabilitation of the synagogue. His concerns with the preservation of the past, e.g., the archives of the now extinct pre-war generation, are merged with those of the present.

From Stanislawow, we seized the opportunity to visit Nadworna (now Nadvirna) and Delatyn, two nearby places where members of the Hubschman-Pfeffer and Stern families once lived. The Nadvirna cemetery is completely abandoned to high, wild grass; only a few gravestones still stand among the trees. As we were leaving, we faced a tractor that had just emptied a trailer filled with manure right into the cemetery. The driver hardly understood our emotion and remarks. He almost started a fight with our guide who asked him whether he also dumped manure in the Christian cemetery.

In Delatyn, one reaches the cemetery after crossing a bridge and climbing onto an unpaved road. There, we discovered engraved Jewish gravestones used as paving stones. The cemetery itself seemed less vandalized than that in Nadvirna. Yet, at the edge of the burial ground, we found a mass grave where the Jews’ executions had taken place. The grave is only partially sealed with concrete. The uncovered part is currently used as a dumping ground for waste, some of which is burned there. In fact, a Ukrainian we encountered on the road showed us the way to the dumping ground – and the mass grave – which we would not have discovered without him.

After our trip, we wrote the following to the ambassador of Ukraine in Paris:

As the Jewish presence is now but a shadow of what it was before the Second World War, one can understand, that synagogues are falling into ruins, that cemeteries are more or less abandoned. Does this situation justify the dumping of manure and waste? Are there no other possible places? Are the same acts practiced in Christian cemeteries?

After the 20th century tragedies and massacres, Europe has decided to build its unity not only as an economic entity but also on the basis of shared values among which respect for the dead — and for their graves — is undoubtedly central.

This letter remains unanswered to this day. 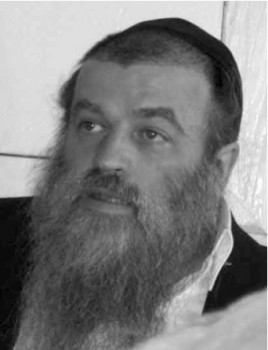 During our tour of Eastern Galicia we visited many shtetls and towns: Stryi, Dolyna, Kolomya, Chortkow and Brody; and we traveled to the heart of the Yiddishland, the Bukovina and Czernovicz, the city of Paul Celan and Aharon Appelfeld. We visited the “Ukrainian National House,” where writers and intellectuals met in 1908 to advocate a new official status for Yiddish, which was then regarded by some as a dialect, inferior to more “prestigious” languages like German, Russian and Polish.

Today, the city’s rabbi is one of the few Yiddish-speaking individuals living there. Religious services are held for a small Jewish community in the synagogue. Ukrainian women, to whom he gives medical care and advice on the premises that serve as a dispensary, regard Rabbi Kaufmansky as a Tsaddik. As we sat in the synagogue, we could see the line of women waiting outside, while the rabbi explained that this action is his only means to fight anti-Semitism. The rebuilt walls of the small temple had recently been splashed with eggs.

One should have few illusions when traveling to Ukraine in search of a vanished past. Only very few – and very old – witnesses of the pre- war and war periods are still alive. Moreover, as pointed out by André Kosmicki and a fellow traveler and historian, Guy Konopnicki, over one million Poles who had been familiar with the world of shtetls – among them potential witnesses – were dis- placed from Galicia under Stalin.

Many people who live in Ukraine “have seen nothing” or “have forgotten everything.”

Travelers may see the beginning of a new Jewish world, yet they will also see the remains of a past world that is still being erased.
[/level-gesher-galicia-member]