“The midwife was respected and loved but there was no status or yikhus involved. She was paid. If it was a boy she usually got more pay because at the circumcision all the guests left something for her. She was paid according to the means of the family. The child will stand in a special relationship to the woman who attends his mother at his birth. He pays her visits and she participates in all the festivals and celebrations of his life. He gives her gifts, especially when he is married, and he mourns at her funeral. She calls the children she delivers her ‘babies’ and she in turn is known to all the community as ‘granny,’ di Bobeh.” (Mark Zborowski and Elitzabeth Herzog, Life is With People: The Jewish Little Town of Eastern Europe, International Universities Press, 1952)

In June of 1990, I joined the Cleveland Jewish Genealogy Society. The time seemed right to pursue a childhood dream: to investigate stories my mother had told me about her mother, Chana Fleischmann Reiter, 1851-1939. Were they exaggerations or facts?

My mother, Lena Reiter Blitzer, talked about her mother, Chana, with an air of pride that seemed to say, “you can’t know what my family was then and how many people came to pay their respect when she arrived in New York in 1913.” And mama would tell me that her mother was a graduated midwife who, at the age of 65, when she came to the US, traveled to Columbus, Ohio, and took an examination to be re-certified to practice midwifery. Lena did not mention where the test took place or the exact year; she just added that Chana practiced about 10 more years.

Pictures of my grandmother delivering babies, baking at holiday time, and sending my mother on the trolley to deliver baskets of pastries to clients were rich images to feed my imagination. The idea of a professional woman fascinated me, too, as I was beginning to think about my future. The thought of a girl, especially a Jewish one, in the 1800s having the opportunity to be educated (Chana had graduated from a gymnasium), build a career, contribute to and hold a responsible position in the community, and of course, provide additional income for her family, whetted my appetite to know more about this woman I had never met, for Chana had died in Cincinnati, age 89, when I was about 7.

The only bits of information I had about Chana’s past was that she had married three times. Lena told me that Chana’s first husband had tuberculosis. He and several of their children died from this dread and prevalent disease. Later, I learned that Chana married again, but divorced after one year. Her third marriage was to my grandfather, Fischel Reiter, 11 years her senior. They had several children, but only three grew to adulthood. In all, Chana bore about ten children.

I decided to find out what I could about Chana and her career. My older siblings (I’m the sixth of seven children) recalled seeing a diploma, about three feet square, hanging on the wall in our house. They thought it might have been from the University of Vienna.

After numerous dead-end investigations, I made an appointment to meet Ms. Jenkins, curator of the Ditrick Archival Medical Museum, housed in the Allen Memorial Medical Library on the campus of Case Western Reserve University. At that point, I just wanted to learn about the history of midwifery and look at artifacts, such as diplomas and applications, or find anything related to the profession. To my delight, this wonderful woman spent an entire morning showing me a variety of items and articles pertaining to midwifery written in the United States during the years 1919-20. For example, Florence S. Wright, Supervisor of Midwifery, New Jersey State Department of Health, wrote at least six articles on the subject from July to December, 1919, and more in 1920. 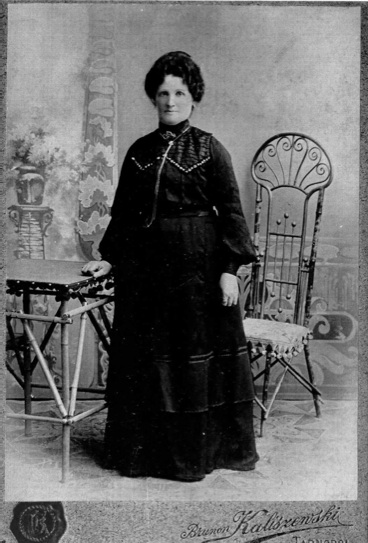 This photograph could be from ca. 1880—Chana’s picture to Fischel when they were going to be married in a religious ceremony—or ca. 1890 when they had a civil marriage.

Note the gold watch and chain. I could write a story about it. But in this picture, Chana tucks the watch in her belt. I’m not sure if this is unique to midwives or the dress style then.

It was a long, heavy gold chain, with a large gold watch. All the “outlaws” you might say were in hot pursuit of it. Chana, feeling indebted to the families who took her in over the years, promised each a “piece.” One daughter-in-law said, “For all the people Chana promised, the chain would stretch the length of a city block.”

In the end, she gave the watch and brooch to my mother, the chain to someone else.

Midwifery, it turns out, was the catalyst of women’s issues at that time. It was not unlike the Women’s Rights Issues of the 1960s.

The prize item in the museum, as far as I was concerned, was a small, red, silk-bound book, dated 1898. It was probably a woman’s personal directory containing names of physicians, surgeons, dentists, nurses, midwives, chiropractors, and masseurs.

The gold-edged pages contain a digest of state laws pertaining to each profession: when and where the exams were given, the state law number, the costs, and the laws for revoking such certification, etc. Ohio State midwifery regulation had become law in 1896. One page listed “Graduated Midwives” with the names of hospitals and the graduation year; another page showed those who were “Experienced Midwives.” For the first time I understood why my mother referred to Chana as a “graduated,” rather than as a graduate, midwife. “Graduated” was the correct term, (I thought it was my mother’s English), designating the midwife had passed comprehensive oral and written examinations.

Soon after this visit to the museum, I traveled to Toledo to do research at the Main library. Their holdings include archival records of the Toledo Probate Court and, to my shock, listed was a microfilm of the very diplomas granted to persons with the professions contained in the red silk book! The description of the film listed the diplomas (1898-1945) covering doctors, nurses, dentists and “others.” I began reading, but finding no midwifery records, stopped short of continuing to the end.

When I returned to Cleveland, I called Victor Wagher, the archivist of Bowling Green State University, about another matter and, in speaking to him, I mentioned the film I had seen in Toledo. He told me there would be a copy of it in his department, too. I asked him to check it. He did—and found Chana listed: “Anna Reiter, Feb. 27, 1917.” The exam was given twice a year, in January and July. The cost was $5, plus $10 ($10 in 1917 is equivalent to about $150 today) paid to the Probate Court. Soon after, I received a 1917 copy of the Toledo Directory that listed Anna Reiter, midwife, on a separate page from her husband, Philip. This was the first time Anna’s name had appeared in the City Directory since arriving in Toledo in 1913.

A few years later I visited an elderly relative. She told me she remembered Chana traveling with my aunt to Columbus, taking the exam in German, and being told she had a perfect score. They told my grandmother that her medical knowledge was such that she could have passed the physician’s exam, too, but because she didn’t speak English (although she could read and write several lan- guages), she could never practice in an American hospital. Chana continued to practice among the immigrants for 10 more years, retiring at the age of 75. One question continued to haunt me. Why did my grandmother, at this stage of her life, decide to return to the practice?

I found the answer in the Toledo City Directories, 1913-1928. They show my grandparents Philip and Chana REITER starting out in a two-family house they shared with one of their sons. Over the next 15 years, they moved several times to smaller lodgings, yet the 1920s economy was booming. Finally, in 1928 (Philip died in 1921), Chana was renting the back bedroom of someone’s home. I imagine the economics of her situation when she arrived to Toledo were a jolt to her self-image — for the first time Chana and Philip were dependent on their sons for sustenance.

Over the years, I gathered more information.

When Chana lived with us (she moved from relative to relative), she would remain in her bedroom until formally dressed, as if going to work. Her wig, which she made from her own hair (I was told this was a special art form—she made and sold them) would be combed, and her gold watch and brooch in place. One day when my oldest brother, then about 16, sneaked a cigarette, Chana in her 80s said, “Let me have one, I used to smoke them in Europe.”

Chana was a strict orthodox Jew, and read the Bible daily until she died. What was she doing and where could she have been in the late 1800s that smoking was acceptable for women? I never found the answer, but I surmise that my disciplined grandmother clung to her professional persona as best she could. Contrarily, Chana could not change her ways to live as a housewife; she was chided for this by the female “in-laws” of the family. Petty jealousies, rather than appreciation and/or respect for Chana and her accomplishments, prevailed among them.

Chana’s life in her later years is a sad contrast to what it had been in the old country. Perhaps her comment (again in her 80s) made to my sister who was about 12 sums up Chana’s feelings: “A girl doesn’t have to know too much in this world.” Was this her way of expressing the difficulty she experienced juggling the roles of wife, mother, mother-in-law, professional, and immigrant?

The above story is a revised excerpt of an article originally written for a contest sponsored by the Southern California Genealogy Society. It was chosen as “Editor’s Choice” and published in the January/February, 2002, issue of their quarterly journal, The Searcher. The full article can be found at www.reiterblitzer.com.
[/level-gesher-galicia-member]