Editor’s Note: This article — in two parts — consists of two lightly edited chapters of a paper written by Max’s granddaughter, Aurelie, in April 2002 when she was in seventh grade. After he made aliya, Max Lederfeind changed his name to Meir Amidan.

The material was translated into English by Mordy Hahn, whom the author wishes to thank. The articles were based on interviews conducted by members of her family and other Kibbutz members with Meir, who died when Aurelie was nine years old. Aurelie is now 17 and a senior in high school where she is doing very well.

Rynek in Kolomyya when Meir was young

Meir was born on February 9, 1912 in Kolomea, a town in eastern Galicia. Galicia was then in the realm of the Austro-Hungarian empire. His parents were Toni (nee Palker) and Joseph Lederfeind; many members of both families lived in Kolomea. The Jewish community in Kolomea was among the largest in Galicia and numbered between fifteen and twenty thousand persons, more than one third of the town’s total population. The non-Jews, including those from surrounding villages, were Poles and Ukrainians.

Kolomea was the district capital with some forty thousand inhabitants. The streets were not paved and were covered with snow in the winter and mud or dust the rest of the year. During the period of Meir’s childhood the houses in the town lacked both electricity and running water. Water carriers roamed the streets daily and sold water to the inhabitants. In order to wash one would heat the water on the stove and fill a tub with warm water. Everyone in the family would take turn in the same water in order to save the precious water.

The dwellings were lit with kerosene lamps. When people entered the house at night, they didn’t turn on the light switch, but had to look for matches to light a lamp or a candle. There was no toilet within the house. It was outside in the yard. There was a bedpan in each bedroom, for it was difficult to go outside in the dark or cold.

There was only one telephone in Kolomea and it was in the postoffice. In order to use it or to receive a call, one had to reserve beforehand the day and time. When it became known that someone reserved time for a phone call, it was a topic for gossip: “What happened?” people would whisper.

There were almost no cars. In all Meir’s years in Poland, he never rode in a car. The train was used for long journeys and horse-drawn wagons and coaches for local travel.

There were no radios in the town. Once someone brought an enormous radio, set it up in a hall and sold entrance tickets to anyone who wanted to listen to the technological wonder. Meir was curious. He went there and heard only noise and static, while the radio owner proudly explained : “Here’s London”, or: “That’s Berlin”. 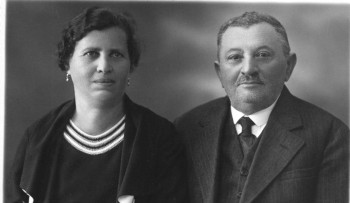 Meir’s family lived in the center of the city, on Church Street (ul. Koscielna), named after the church, which was located, just in spite, in the heart of the Jewish quarter. In addition, the Christians made sure to display the four Hebrew letters that comprise the holy name of God right under the cross on the church steeple, manifesting that the Cross was above the God of the Jews.

His Hebrew name, Meir, was given to him after his great-grandfather. His civil name was Max. (In those times it was common among Galician Jews to give a child two names, one Hebrew and one civil, both beginning with the same letter.) The origin of the family name Lederfeind is lost in the mists of the past. Meir once asked his grandfather, Noah Abraham, but the old man himself did not know the origin of the name. Noah added that his own grandfather, Kopel, born in the 18th century, was also called Lederfeind.

Meir’s family used two languages: Yiddish at home and among Jews, and Polish outside on the street with non-Jewish neighbors and with the authorities. Meir’s father had a grocery store. The family was not rich, but was comfortably well off, and its members never knew hunger or want. The family was not extremely pious, but the parents were religious and observed the Jewish tradition and life style. Gershon, the oldest son, was the first to deny religion, and even joined the Hashomer Hatzair youth movement, serving as an example later on for young Meir. The family had a Zionist consciousness, read a Zionist newspaper in Yiddish called “News” and Meir had private Hebrew lessons starting when he was 10 years old.

In the First World War, when the Russians invaded Austria, Galicia became a battlefield that changed hands several times between the battling armies. As did many other Jewish families, Meir’s family fled pogroms and the horrors of war to Czechoslovakia. Meir’s father was drafted into the Austrian army, which increased the hardships of the family. While in Czechoslovakia, the family lived in poverty and crowded conditions as desperate refugees. Meir was sent there to a cheder and then to a Jewish school to study.

In 1918, when the war ended, the family returned to Kolomea. The town, which was under Ukrainian rule for a short time, was then annexed to Poland. At age six Meir was sent to a Polish school, where many Jewish children attended, so he didn’t suffer anti-Semitism there. At the age of ten he wished to study at the Polish Gymnasia, but they accepted almost no Jews. For this reason he was obliged to study at the Ukrainian Gymnasia. Meir was not fluent in Ukrainian and had to do 4th grade again in a Ukrainian elementary school to improve his ability in that language. In the Ukrainian Gymnasia anti-Semitism was rife and the Jewish pupils suffered daily degradations and torment. The teachers were Orthodox priests and hated Jews. The Jewish children there had to be outstanding pupils in order to survive.

It was natural that Meir did not like school or studying there. Even walking to the school or back home entailed hardships that could not always be avoided. Gangs of Ukrainian youths would waylay the Jewish children to harass them. Meir was not tall, but he was courageous and would stand up and fight back, returning blow for blow, fighting with the Ukrainian youths.

At Meir’s bar mitzvah he put on his tfillin and for a while afterward, he still kept Jewish ordinances (mitzvoth), prayed and believed in God with all his heart. The turnaround of his faith took place at the age of 13 “. He chanced to read a Marxist pamphlet. It described the secular world outlook: creation of the world, evolution, role of religion, etc. Meir wrote: “Then my eyes were opened and I realized that my religious faith was false”. He gave up religion and stopped fulfilling Jewish religious routine. By chance this turnaround happened just before Yom Kippur and Meir refused to attend services at the synagogue, refused to pray, and refused to fast. He finally agreed to come to the synagogue, but only in order to save the family dignity, but he would not pray.
[/level-gesher-galicia-member]