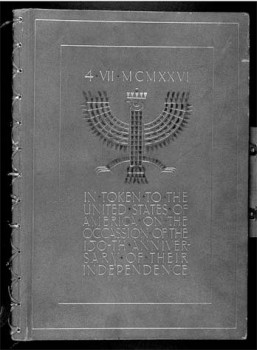 In November 2004 I visited the Library of Congress (LOC) in Washington DC. I was looking for some specific material that I thought was to be found there. After searching the catalogues the librarian on duty suggested that I speak with Ron Bachman, Area Specialist for Poland – European Division. She placed a phone call and Ron came up to meet me. The material I was looking for was not to be found at the LOC, but, if I were interested, he would tell me about something new he was working on. Don then showed me samples of the material that would soon be available to the public. I can’t begin to describe the emotions that ran through me when I saw the material. I wanted to run out and tell everyone about it. But since the material was still being catalogued and prepared, he asked me to “keep it under my hat.”

I received an e-mail from Don Bachman just before Pesach telling me the project was finished and giving me permission to “spread the word.” This I am doing with great pleasure!

The Polish Declarations of Admiration and Friendship for the United States consist of a collection of 111 manuscript volumes compiled in Poland in 1926 and delivered to President Calvin Coolidge to honor the 150th anniversary of the US Declaration of Independence. Richly illustrated with original works by prominent Polish graphic artists, the collection includes the greetings and signatures of national, provincial and local government officials, representatives of religious, social, business, academic, and military institutions, and school children.

President Coolidge asked that this collection be transferred to the Library of Congress where it remained “forgotten” for some 70 years. In 1996, during the visit of Polish First Lady Jolanta Kwasniewska and other Polish dignitaries, the collection was serendipitously “rediscovered.” It generated such great interest that the Library, in collaboration with the Polish Embassy, organized a special event on May 2, 1997 to showcase it.

What exactly are these books? They represent entries from hundreds of elementary and secondary schools throughout Poland, including shtetlach in former Galicia that were part of Poland in the interwar years. Almost every town, village and shtetl that had a school is represented. Almost every pupil in every class signed his/her name. I looked, of course, at the pages for the schools in the shtetlach from where my family came and recognized surnames, saw their handwriting and, with tears in my eyes, turned the pages to see more.

As I viewed the volumes and the list of towns my excitement grew as I came to realize the importance of what I was seeing. The Manuscript Volumes include signatures of nearly one-sixth of the population of Poland, as it existed in 1926. More than 5.5 million signatures were collected, many from villages so small that they are not even listed in most Gazetteers and Geographic Dictionaries.

The collection is an important source for genealogical, historical, and sociological research. Renee S. Steinig described it best when I shared this wonderful resource with her:

Now that I have viewed the town list I better understand your excitement about this source. If it includes two pages from my mother’s little village (population ca. 600), the coverage must be sweeping. This is a very important Holocaust resource, in which we may be able to retrieve the names of our cousins who were 20-35 when they perished. Many of us now have unnamed cousins on our lists of victims (e.g. Uncle Yankel’s six children). This source presents an opportunity to rescue them from anonymity. In the words of Isaiah, quoted on Yad Vashem’s Pages of Testimony, “And I shall give them in My house and within My walls a memorial and a name, that they shall not be cut off.” The town list is also a good informal gazetteer of interwar Poland.

The collection consists of 111 manuscript volumes:

Volume 1, the most impressive of all the volumes, is bound in red leather and contains 135 pages of signatures. The cover, gilded and blind stamped with an eagle, is richly illustrated and consist of signatures of central government officials including President Ignacy Moscick, members of the Senate and Sejm, the Council of Ministers, the General Staff and the Supreme Court; religious dignitaries and officers and rank-and-file members of a wide range of national professional associations, institutes, and social organizations based in the capital city, Warsaw. Many of the signed sheets have finely drawn illustrations of buildings, coats of arms, historical monuments, rural and city scenes, and portraits of famous historical figures. The signatures are often accompanied by official seals.

Volume 2 is bound in white leather and contains 281 pages of signatures in addition to separate sheets devoted to art. The front and back covers are gilded and blind stamped with emblems of Polish provinces (wojewodztwo). It presents the signatures of dignitaries on the provincial, district, and local levels. Preceding each provincial section are postersize original works by prominent artists. The final quarter of this volume is devoted to institutions of higher learning and includes signatures of administrators, faculty, and students.

Volumes 3 through 5 have signatures from three separate institutions of higher learning: Jagiellonian University in Cracow, the Mining Academy of Cracow and the State Dental Institute in Warsaw.

Volume 6 represents the Polish émigré community mainly a cross-section of the Polish population of Austria.

Volumes 7 through 13 are bound in linen and adorned with Polish and American emblems. Many of the sheets are adorned with drawings and photographs of schools, students, and teachers and contain the signatures of the students and faculty of 1,170 mostly secondary schools, although some primary schools are included.

These volumes have been digitized. This searchable online presentation is a complete facsimile of the six oversized presentation volumes and the seven volumes of secondary school signatures. Researchers are now able to search by keyword (English or Polish without diacritics) and locate information about particular villages, cities, districts, provinces, institutions, or organizations. 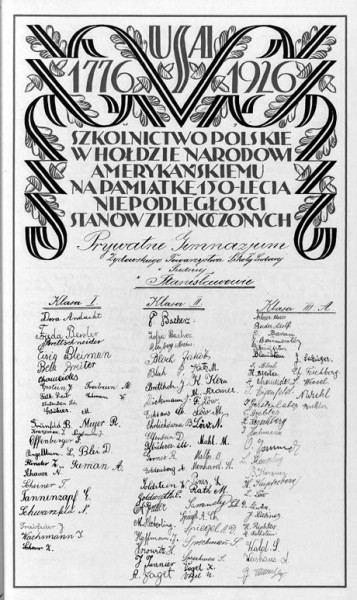 Signatures of Girls Attending a Private Gymnasium in Stanislawow

To view school pages for a particular town:

The best way to enlarge the pages to view them:

Volumes 14-109 contain sheets bearing the names or signatures of teachers and pupils of some 20,000 elementary schools. Each sheet is decorated with a letterhead that reads “Szkolnictwo polskie w holdzie narodowi amerykanskiemu na pamiatke 150-lecia niepodleglosci Stanow Zjednoczonych” [The Polish Educational System in Tribute to the American Nation on the Occasion of the 150th Year of American Independence]. Below this are boxes for the name of the school, location, administrative district, school trustee, school principal and school inspector. The total number of names or signatures contained in these volumes is estimated at about five million. These volumes also include photographs of schools, teachers, and pupils. Some 235 school districts are represented including the Galician School Districts.

It appears that the “szkola powszechna” entries in volumes 7-13 are primary schools, as opposed to the “gimnazjum,” “seminarjum,” “szkola wyzsza,” “szkola handlowa,” “szkola przemyslowa,” “szkola zawodowa,” etc., entries, which clearly are secondary schools. What is interesting is that in the digitized school volumes (7-13), the penmanship is so uniform and mature-looking, and there was such an effort to arrange the signatures in an eyeappealing way. Perhaps the faculty signed the pupils’ names. The “szkola powszechna” entries in volumes 14-110, on the other hand, usually appear to have been signed by the children themselves.

Only the secondary school volumes are available online. There are no plans to digitize the primary school volumes but they have been catalogued and indexed by Ron Bachman at www.loc.gov/rr/european/egwinv/index.html. There are reasons why you might not find the page for a town or shtetl: maybe they failed to get the forms completed and returned by the deadline. Volume 110 is a portfolio of loose sheets, which apparently arrived too late to be bound. In fact the towns in volumes 94 -110 are in random order, probably because the sheets arrived too late to be bound with their respective powiats. The two volumes that were not included because they could not be located for scanning (we hope they will show up eventually) are Volume 45 (Krotoszyn through Lipno powiats) and Volume 73 (Sanok through Siedlce powiats).
[/level-gesher-galicia-member]