Postcards and contemporary newspapers have been significant among the manifold sources I have drawn on during my study of family history. In my first book I described how a postcard written in 1916 from the Eastern Front by Austrian army doctor Abraham Loew to his cousin Regina Griffel opened up a trail that led from Vienna via London to New York and Chicago, back to Strasbourg, and finally to Tarnobrzeg in Austrian Galicia. It was only in this roundabout way that I managed to locate the family of my maternal grandmother Chawa Wahl and, in due course, scores of cousins of the Griffel, Loew, Taube, Safier, and other related families (Edward Gelles, An Ancient Lineage: European Roots of a Jewish Family, Vallentine Mitchell: London, 2006). 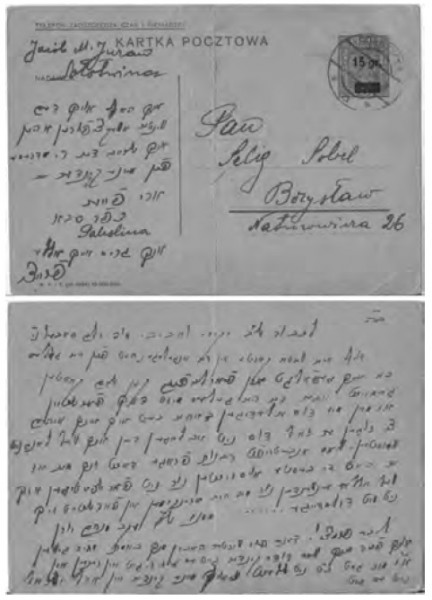 More recent discoveries of old postcards and other ephemera have revealed much about paternal first cousins of whose very existence I had been unaware. These sources are also shedding new light on the life of my grandfather, Nahum Uri Gelles, who was Chief Rabbi of Solotwina, near Stanislau (Stanislawow). He succeeded his father-in-law in that post in 1884 and held it until his death in 1934. It now emerges that he spent much time away from Solotwina visiting other Galician communities. More importantly, he stayed in Vienna for about ten years after the outbreak of World War I and played a prominent role in its Orthodox community.

In my latest book on Gelles, Shapiro, and Friedman family connections I detailed some of these new findings (Family Connections: Gelles–Shapiro–Friedman, Shaker Publishing B.V.: The Netherlands, 2009). Various Jewish newspapers published in Vienna in the interwar years recorded my grandfather’s flight from Galicia to the Imperial capital in 1914; his work in aid of Galician refugees who had come to that city in the thousands; his activities as a teacher and examiner at Orthodox seminaries and as a speaker at public functions; and his close association with the leader of the Czortkow Hasidic connection, the Grand Rabbi Israel Friedman. Friedman had also taken up residence in Vienna in 1914 and remained there after the war as one of the leaders of Orthodox Jewry, while maintaining close contact with his followers in the lands that were incorporated in the postwar Polish republic.

My book also related the discovery of postcards that brought to light two first cousins in Galicia who were the orphaned children of my grandfather’s eldest son, Efraim Fischel Gelles. The first postcard was from a Mr. Spiegel, who wrote from Galicia on the last day of 1934, just over a month after my grandfather’s death. The card was addressed to Josef Gelles care of Leo Gelles in Vienna. The sender, who described himself as Josef’s prospective father-in-law, urged Josef to return to Solotwina as quickly as possible to stake his right by ancient custom to the now vacant position of his grandfather.

The second postcard was from Ch. Gelles in Solotwina to Josef Gelles in Boryslaw, asking the “dear children” to come quickly to Solotwina to help her secure a modest pension as the rabbi’s widow. Chaya Malke could be identified as Nahum Uri’s widow from letters between her and the local authorities that are in the Solotwina files at the Central Archive for the History of the Jewish People in Jerusalem. Nahum Uri’s first wife, my grandmother Esther Weinstein, was the daughter of Zvi Aryeh Weinstein, the Rabbi of Solotwina to whose post my grandfather succeeded. She died in 1907, and as community rabbis needed to be married, it came as no surprise to find that he had later taken a second wife. Nahum Uri’s eldest son Efraim predeceased him, so it was his grand- son Josef who now put forward a claim as a qualified successor, having studied at the prestigious Lublin Sages Yeshivah under Rabbi Yehuda Meir Shapira (“End of the Gelles Rabbinic Line”, The Galitzianer, Vol. 16, No. 1, November 2008).

The third and fourth postcards turned up on eBay a few months later and are the subject of an article in a recent issue of The Galitzianer (“Postcards and Other Ephemera in Genealogical Research: Josef and Giza Gelles in Boryslaw”, Vol. 17, No. 2, February 2010). Josef wrote from Boryslaw to his brother Leo in Vienna on 6 September 1935, announcing his impending marriage and talking about his concern for Gittel. A card sent to Leo a week later, on 13 September, had greetings from Josef and separately from Giza Gelles. It was written from Stanislawow on Josef’s wedding day and thus not only confirmed the place and date of Josef’s marriage but also proved the identity of Josef and Leo’s sister, referred to variously by her German name Giza and Jewish name Gittel.

The fifth and sixth postcards that have now come to hand extend our knowledge of Josef’s brief life and the protracted issue of the succession to my grandfather in the Solotwina rabbinate.

A card from Jacob Juran to his friend and relative Selig Sobel appears to date from the beginning of 1935. Mr. Juran was looking after matters relating to the settlement of the late rabbi’s affairs in Solotwina. He expressed his opinion that Josef had a very good chance of gaining his grandfather’s post but urged him not to delay his return from Vienna.

The name of Mr. Juran came up again some months later in a card from Josef to Leo Gelles, dated 10 November 1935. It gave Josef’s address as Rynek 20 in Stanislawow, in the market square of the town in which he appeared to have settled after his recent marriage there. Josef expressed the hope that Aunt Reize (Rosa) had passed on his greetings to Leo (Rosa may have come from Vienna to attend the wedding in Stanislawow). Josef described to his brother his daily routine of opening the shop in the morning and locking up at night. The rest of his time was devoted to study in preparation for his rabbinical ordination. The long drawn-out arguments that finally led to the appointment of a distant kinsman, Rabbi Yoel Babad, as Av Beth Din of Solotwina still lay in the future. As for the shop, the 1931 Polish Business Directory listed a drapery goods store at No. 18 of the square in the name of T. Spiegel. It is a plausible assumption that it was owned by Josef’s in-laws and run by his bride and that the newlyweds lived next door at No. 20. Neither house survived the war. Josef’s sister Giza presumably continued to live at the Gelles family home, Lukasiewicza Street 18 in Boryslaw, where her residence was documented as late as 1941.

In this latest card Josef was pessimistic about his economic prospects in Poland and considered emigrating to Palestine, where his aunt Lotte (Leah) had settled. He went on to report on outstanding financial matters, such as the inheritance he expected from the court and the sum of 2,000 zloty owed to his grandfather by the (Solotwina?) Jewish community. There were also claims of smaller sums due to Tanenzap(f) and Oliver for performance of religious services and numerous small amounts owed to tradesmen and others. He considered the possibility of giving Oliver authority over part of the aforementioned sum of 2,000 zloty to settle debts. He mentioned the help of Mr. Juran again and some payment that the latter had received. He asked Leo to obtain Uncle David’s opinion on the proposed settlement of sundry debts from the moneys still owed to the estate by the community. He concluded by asking about the erection of his grandfather’s tombstone in Vienna, as the first anniversary of his death was nigh.

The postcard history of Josef Gelles puts his home firmly in Boryslaw, where he lived as a boy and where he returned after years in an Agudas orphanage near Vienna fol- lowed by further years of study at the Lublin Yeshivah. A postcard has now confirmed his marriage to a Spiegel and a base in Stanislawow. At this juncture it seems reasonable to assume that Josef’s in-laws were closely related to the Spiegels of Solotwina, who married our Weinstein cousins. Josef’s residence in Stanislawow raises the question whether he may have perished there in October 1941 or at a later date rather than in Boryslaw. My search for information on the later lives of Josef and his sister Giza continues. The material thus far so laboriously acquired and presented here has at least rescued them from oblivion; may their souls now find rest.

I am indebted to Yissochor Marmorstein for his help in acquiring the postcards and translating the Hebrew and Yiddish texts.
[/level-gesher-galicia-member]