For one sister, it began for me with a photo and a story from my Rohatyn grandmother. Jute Horn—Dr. Jute Horn—was my grandmother’s idol, her paradigm, her inspiration. She was my grandmother’ s aunt, the oldest sister of my grandmother’s father. The educated one with the medical degree from Vienna. The one who became the dentist. For the other sister, it began in 1998 with a letter and phone call from a man—an aged, emotional man—who pitifully detailed for me how he grew up in Rohatyn, knew my extensive and comfortably middle-class Horn family. A man whose younger sister in the late 1920’s married the youngest of the Horn sons and produced a family. A man who himself married the youngest of the Horn daughters, Bronia Horn—Dr. Bronia Horn—so she could leave Rohatyn with him for Palestine.

It was almost exactly a year ago that we made our first of a dozen visits to Rohatyn in 2011, the prewar home of my paternal grandmother and her large extended family. On that first visit, we were introduced to the 77-year-old Ukrainian school teacher named Mr. Vorobets who was also the town’s recognized expert on local and prewar history and families: Ukrainian, Polish, and Jewish. It was he who directed our attention to the continued presence of the Jewish gravestones, the hundreds if not thousands still existing in town today—some visible, some not—in walls and foundations, on riverbanks and landings, under gardens and asphalt. For more than 20 years, and long before our arrival, Mr. Vorobets had been gathering information whenever these stones and fragments were found by locals and making arrangements to have them moved to the former “new” Jewish cemetery at the north end of town. Now we, too, were part of that process.

The 22nd IAJGS Conference on Jewish Genealogy, held in Toronto from August 4 to August 9, presented dozens of interesting papers and discussions. The following article presents a somewhat arbitrary selection of abstracts of some of these papers: Gravestones and Death Certificates: Can You Believe What You Read?; Jewish Surnames in Galicia; Millennium of Polish Jewry, Part I—Wandering Jew: Migrations of Polish Jews, c. 1000 – c. 2000; Millennium of Polish Jewry, Part II—How Did the Jews in Poland and Eastern Europe Live and Why Did They Emigrate?; Millennium of Polish Jewry, Part III—Poles and Jews: A Shared History, A Divided Memory (Panel discussion); DNA, the Ultimate Genealogical Record: Using Saliva As An Easy Source of DNA; Polish Pronunciation and Grammar Workshop; A Journey to Our Ancestral Shtetlach (Ukraine); The Deadly Triangle: Ukrainians, Jews, and Poles in the Summer of 1941; Genetic Genealogy: Another Tool in the Arsenal; Jewish Cemeteries in Western Galicia; Sources for Jewish Genealogical Research in Western Galicia; 19th Century Jewish Life in Eastern Galicia

In the multinational Austrian army there were, of course, Jewish soldiers. They fought on all fronts of the First World War and were killed with their comrades in arms of other nationalities and regions; but if identified as Jews they were buried separately. All other soldiers, regardless of religion, were buried in common cemeteries or common graves, according to a law derived from Emperor Joseph’s 1784 regulations on burying the dead. Of the dead in all 400 cemeteries, Jews make up 3.72%, which is close to the percentage of Jews in the Austrian army—though among the Jews buried were also some Jewish soldiers from the Russian army. It is also the case, however, that all unidentified corpses were buried in non-Jewish graves, so a number of Jewish dead were buried in common graves at non-Jewish cemeteries.

In June of 1990, I joined the Cleveland Jewish Genealogy Society. The time seemed right to pursue a childhood dream: to investigate stories my mother had told me about her mother, Chana Fleischmann Reiter, 1851-1939. Were they exaggerations or facts? My mother, Lena Reiter Blitzer, talked about her mother, Chana, with an air of pride that seemed to say, “you can’t know what my family was then and how many people came to pay their respect when she arrived in New York in 1913.” And mama would tell me that her mother was a graduated midwife who, at the age of 65, when she came to the US, traveled to Columbus, Ohio, and took an examination to be re-certified to practice midwifery.

GG Matters Coordinator’s Column From the Editors’ Desks Nat Abramowitz: In Memoriam Town Updates Kolomyya Przemysl Rzeszow Tarnobrzeg JRI-Poland Galician Vital Records: What can you Expect? AGAD Project: Is it Too Successful? Feature Articles Abstracts of Some Papers Presented at the Toronto Conference A Tale of Two Cities – Brody in Galicia and Livorno in […] 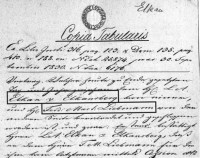 The Yad Vashem Shoah Victims’ Names Recovery Project; a short film documenting the work being done to help the Jewish community of L’viv; a new yizkor book project has been started for Skala Podolskaya, Ukraine; a new KehilaLinks page has been created for Sokal, Ukraine; a book titled Jews in Tarnopol has been posted as individual page images; a memory stick was found in the Jewish cemetery in Tarnów on 13 October 2011; the Vienna Library has digitized and put online for free city directories for Vienna, Austria from 1859 to 1942; the Digitized Collection of Jewish Records is a searchable database of about 5,000 digital copies of Jewish vital, communal, organizational, legal, immigration, school, and other records from the area of the former Austrian province of Eastern Galicia; Jewish Records Indexing-Poland has a source to identify all vital records available in repositories in Poland and Ukraine for towns formerly in the Austrian province of Galicia and now in Ukraine; the Jewish Virtual Library has a page that lists all countries in the world with Jews living there; The Talergofsky Alamanac, Volume 1 (published 1924 in Lvov), discusses the “Terror in Galicia” during 1914–1915. 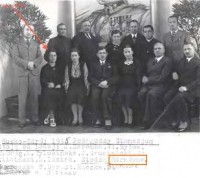 I am not her granddaughter, but I could have been. Bronia Horn was my paternal grandmother’s aunt. There was only a six-year age difference between Bronia and my grandmother. Bronia was born in 1904, my grandmother in 1910. Both were born in Rohatyn, in what was then Eastern Galicia, today western Ukraine. Both left Rohatyn. For my grandmother, the destination was New York in 1914 with her father Isak (almost 20 years older than younger sister Bronia), her mother, and her two sisters. For Bronia, it was Palestine in 1936, to join her older sister Jute, who had emigrated there two years prior. Neither Bronia, Jute, nor my grandmother would ever see their beloved Rohatyn again.

For Poles it was Malopolska Wschodnia, Eastern Little Poland, or the kresy, the borderlands. It had been part of the Polish realm since 1386. Polish poets wrote odes to the kresy. This land was not—never would be—anything other than Polish. For Ukrainians it was Halychyna, but not Ostgalizien, Eastern Galicia, not a part of Poland. They had lived here for a thousand years; they had always constituted the majority of the population; their prince had founded the town of Halych for which the land was named. Its destiny was to be united with the “greater Ukraine” across the border. Jews had lived in Galicia for half a millennium; they had a religion and a language—in fact, two languages—of their own, but their relation to the land was more ambiguous, the choices more difficult.

The Center for Jewish History opened officially in October of 2000. It embodies a partnership of five major institutions of Jewish scholarship, history and art: the American Jewish Historical Society, American Sephardi Federation, Leo Baeck Institute, Yeshiva University Museum, and YIVO Institute for Jewish Research. The Center serves the world- wide academic and general communities with combined holdings of approximately 100 million archival documents, a half million books, and thousands of photographs, artifacts, paintings and textiles—the largest repository documenting the Jewish experience outside of Israel.

The full title of the book is To Galicia: Of Chasidim, Huzules, Poles and Ruthenians: An imaginary journey through the vanished world of Eastern Galicia and Bukovina. (Ruthenians and Huzules are basically Ukrainians.) It describes an imagined trip, mainly by railroad, around the turn of the last century, from Tarnow to Lemberg (I’m using place names as they appear in the book) via Przemysl, Drohobycz, Stryj, Stanislau, Zabie, Kolomea, Czernowitz, Brody and places in between. A quick look at the map will show you that this is far from a linear journey, involving as it does various side trips. For each waypoint, the author draws on contemporaneous accounts for lyrical and (sometimes) not so lyrical descriptions of the lives of Jews, Poles and Ukrainians. The overall impression is of “a rich land of poor people” (in the words of the title of another book by the same author). Among the poorest of these poor people are the majority of its Jewish population.

Jewish genealogy is dominated and complicated by the matter of the Holocaust, which annihilated not only millions of individuals but also most of European Jewish society. Thus, as people search for great-grandparents and second cousins, they may find their names and a few important dates in their lives but know so little about them. Sources of information on Galician Jewish life are scarce, scattered or non-existent. Much of this is can be blamed on the destruction of war and the annihilation of Jewish social structure and institutions.

More issues will be added soon.